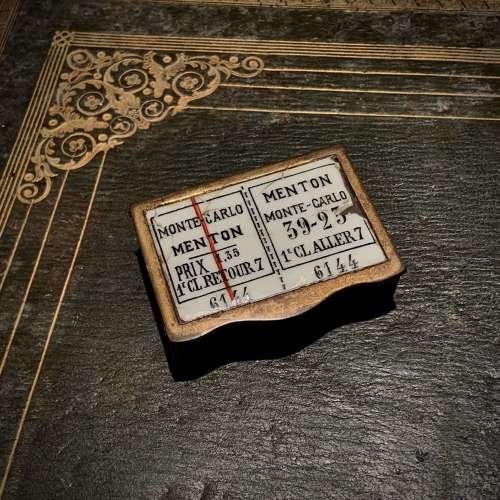 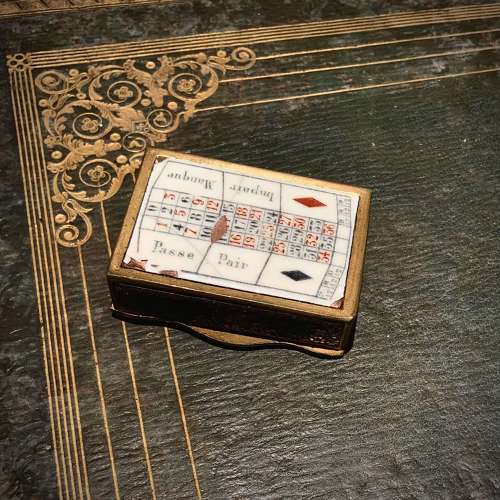 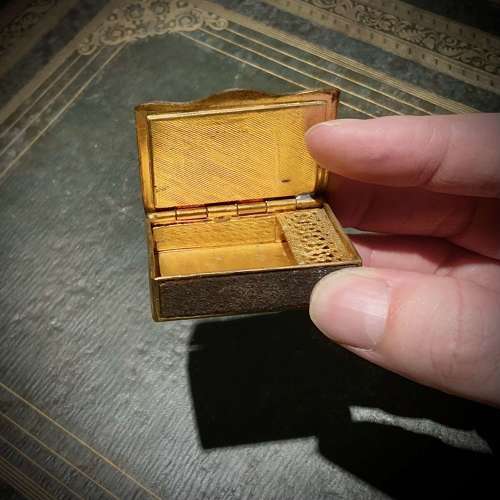 Menton, known as the "Pearl of France", is situated in the Alpes-Maritimes on the Côte d’Azur, to the east of the Principality of Monaco (from which it broke-away in 1848).  In the late 19th Century, alongside Nice, Menton became one of the first Mediterranean resort-towns and a favourite place to stay amongst British and American tourists who were visiting the French Riviera. They stayed in the famous and exclusive hotels here, such as the Grand Hôtel National, the Winter Palace, Hôtel des Anglais, Hôtel Prince De Galles, Grand Hôtel Victoria, Grand Hôtel des Iles-Britanniques and Hôtel Impérial. Menton is only a brief 10 minute railway journey to the Monte Carlo train station, the Gare de Monaco, which was opened in 1868. These amusing vesta cases would have been simple but expensive souvenir of trips made from the resort to the prestigious gaming tables of the Casino de Monte-Carlo.

The lid is spring-loaded to keep it shut, there is a fixed internal grill to help keep the vesta matches in place and, to the front, an integral emery-paper match-striker on which the matches can be lit.

Note:-
A similar Circa 1900 box in silver, with a trompe-l'œil enamel railway ticket for Monte-Carlo / Nice, but with an enamel view of The Grimaldi Palace, Monaco, to the base was sold as Lot 447, Wooley & Wallis, Salisbury, Sale of Silver & Objects of Vertu, 22 July 2020 (sold for GB£ 2,000). That vesta case  bore marks for the Austrian silversmith George Anton Scheidt of Vienna.

Some losses to the enamel. Roughness to the spring to the right hand side.