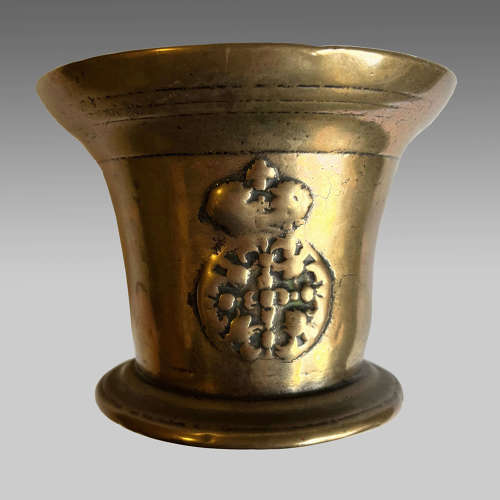 Bronze mortar by Abraham Rudhall 1 of Gloucester. Everted knurled rim, the tapered body with a crowned rosette with tulip roundels,
repeated to the reverse,  over a stepped base.  Abraham Rudhall 1, born Gloucestershire 1657, a known Royalist, he established a business in Gloucester and came to be described as the the greatest bell-founder of his age. For similar, see Michael Finlay’s English decorated mortars, Page 41. Photo No, 48.
English, circa 1660 - 1690

The Rudhall family’s bell foundry in Gloucester was established in the later 17th century by Abraham Rudhall. His first known bells were a ring of five supplied to St. Nicholas’s church in Oddington in 1684 and one of them still remains in the church’s tower and is rung regularly. Abraham rapidly gained credence as a founder and some twenty years later, in an advertisement which appeared in The London Postman in 1705, he announced that since the first year of the reign of James II he had cast 1 ring of ten bells, 10 of eight, 32 of six, and 25 of five, which together with bells for other peals numbered 547 besides others which he could not remember. He had cast bells for 7 cities, 36 market towns, 4 colleges and 162 parishes in thirteen counties, not to mention bells for gentlemen’s seats, chapels and shops. At the time of his death he was referred to as ‘The Prince of English Bellfounders’.

Other items in Antique Bronze Other / misc

View all in Antique Bronze Other / misc

Pair of mid Georgian side chairs