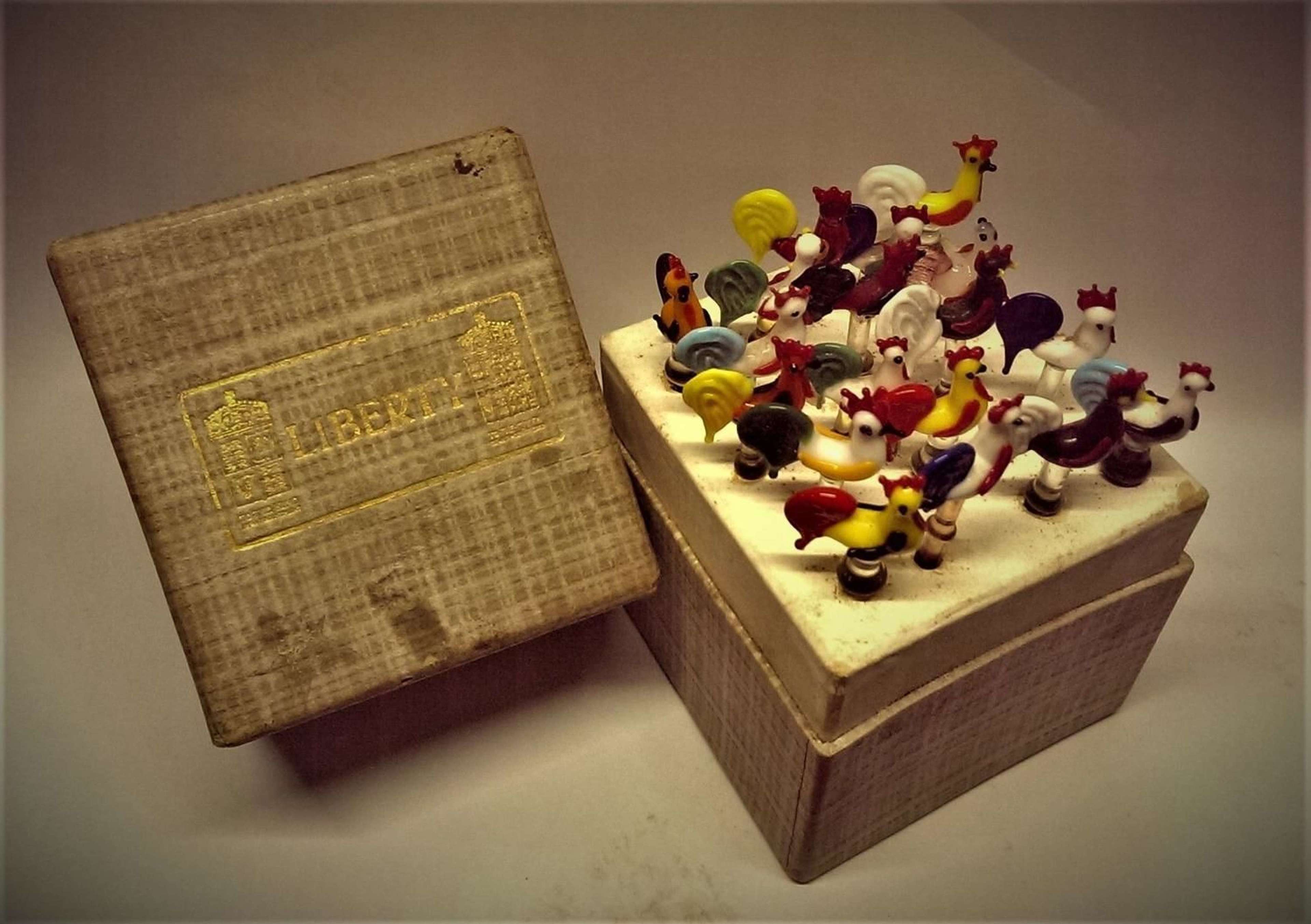 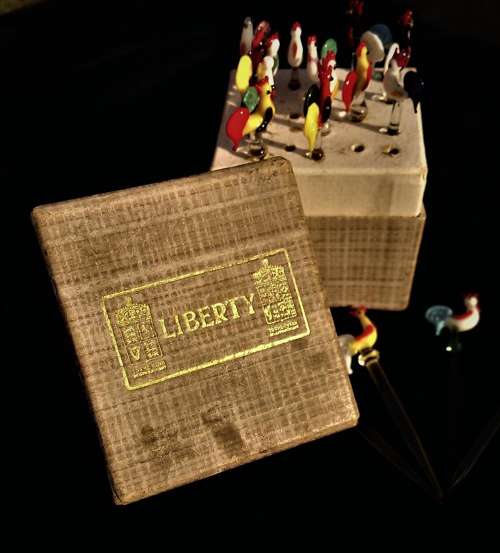 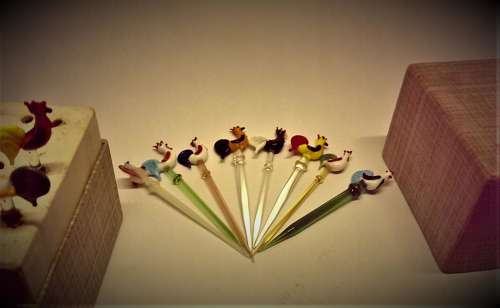 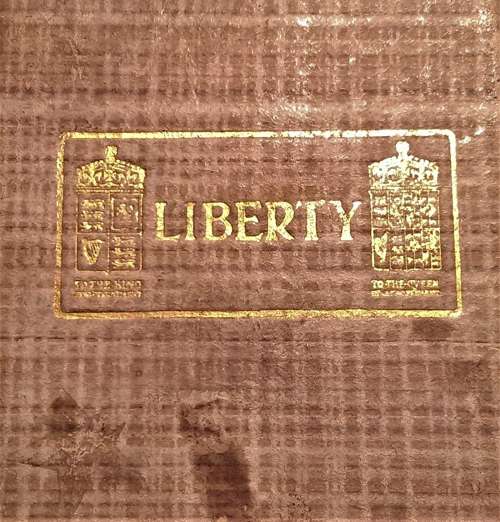 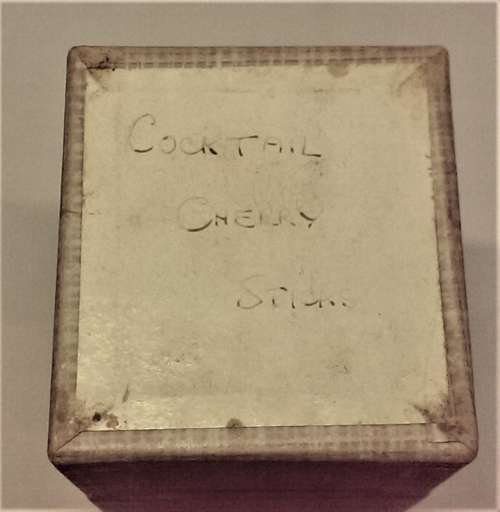 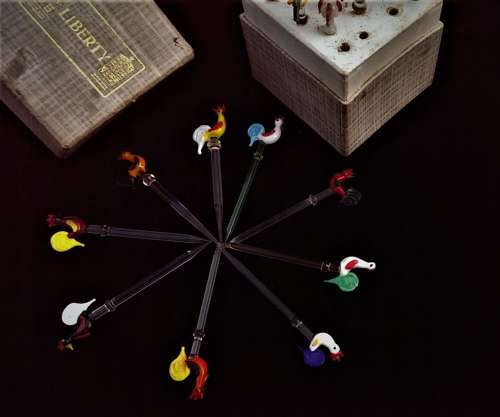 Each stick of hand-made coloured glass, with a cockerel finial, straight pointed stems with an anulet. Within their original card presentation box, printed and embossed with a grey and tan bouclé pattern, bearing the 'Liberty' name and the Royal Warrants of King George V and Queen Mary. Designed as a decorative holder for the glacé cherry or olive as prescribed in certain cocktail recipes and also to assist the drinker with recognising their glass from the coloured cockerel finial (a visual pun on "cock-tail"). Old ink inscription reading "Cocktail Cherry Sticks" to the underside of the box.

The classic Savoy Cocktail Book by Harry Craddock (head barman of the American Bar at London's Savoy Hotel), published in 1930, was the apogee of the vogue for cocktails which swept prohibition America and inter-war Europe. Whether it be Gatsby or Edward, Prince of Wales, and Wallis Simpson, drinking cocktails was simply the most fashionable thing to do in the late 1920's and early 1930's. It is hard to single-out another so small an object, as the cocktail stick, which so encapsulates high-society London's sense of fun, frivolity, elegant style and gentility during the era - and it is for this reason that a set of 5 indentical glass sticks (though lacking their original box) was presented to the Fitzwilliam Museum, Cambridge by the eminent art historian Professor Michael Jaffé (the Museum's former Director) in 1988.

Other items in Antique Cocktail Shakers

View all in Antique Cocktail Shakers 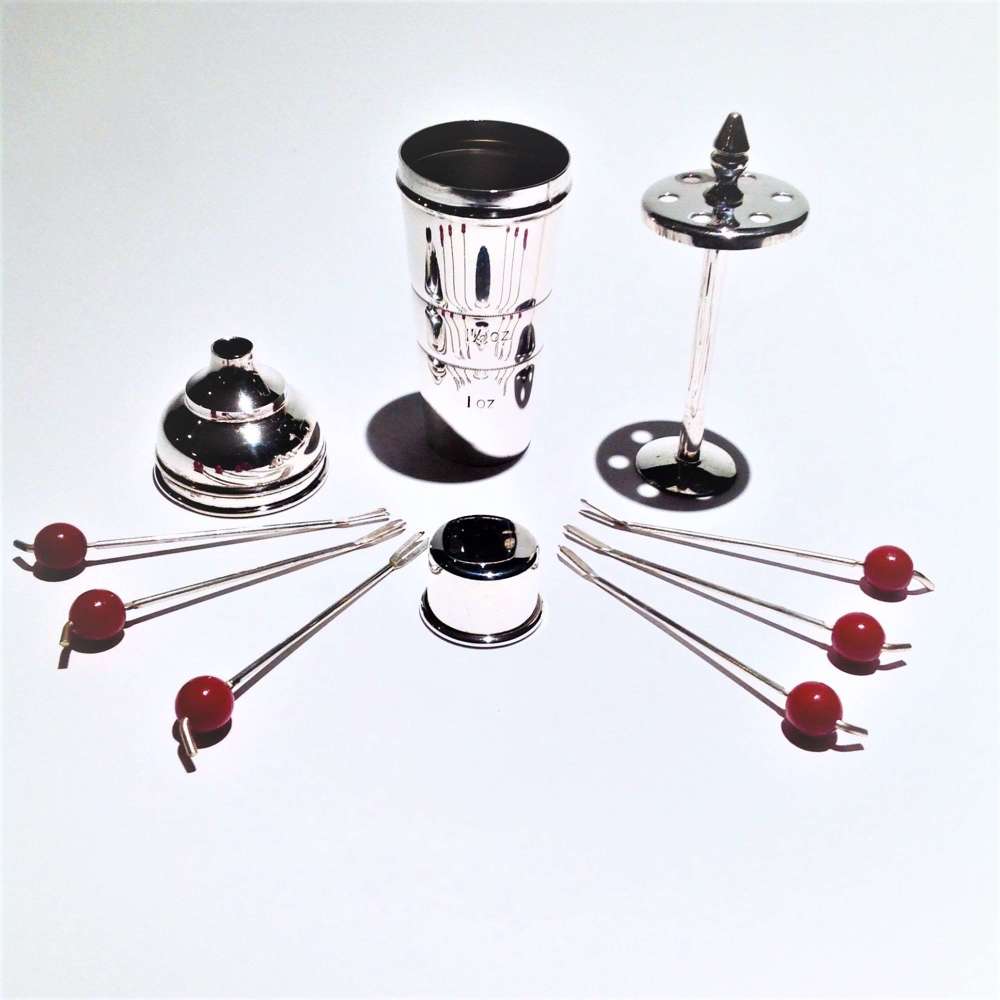 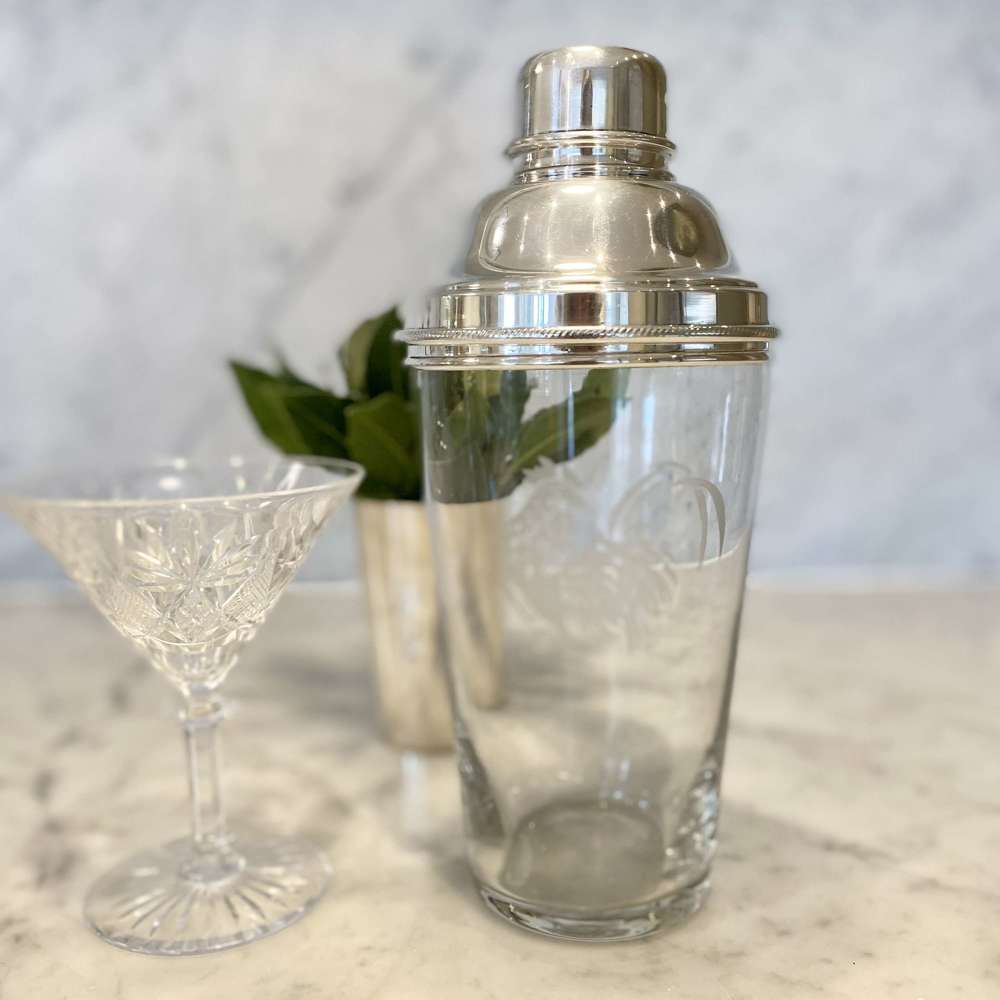 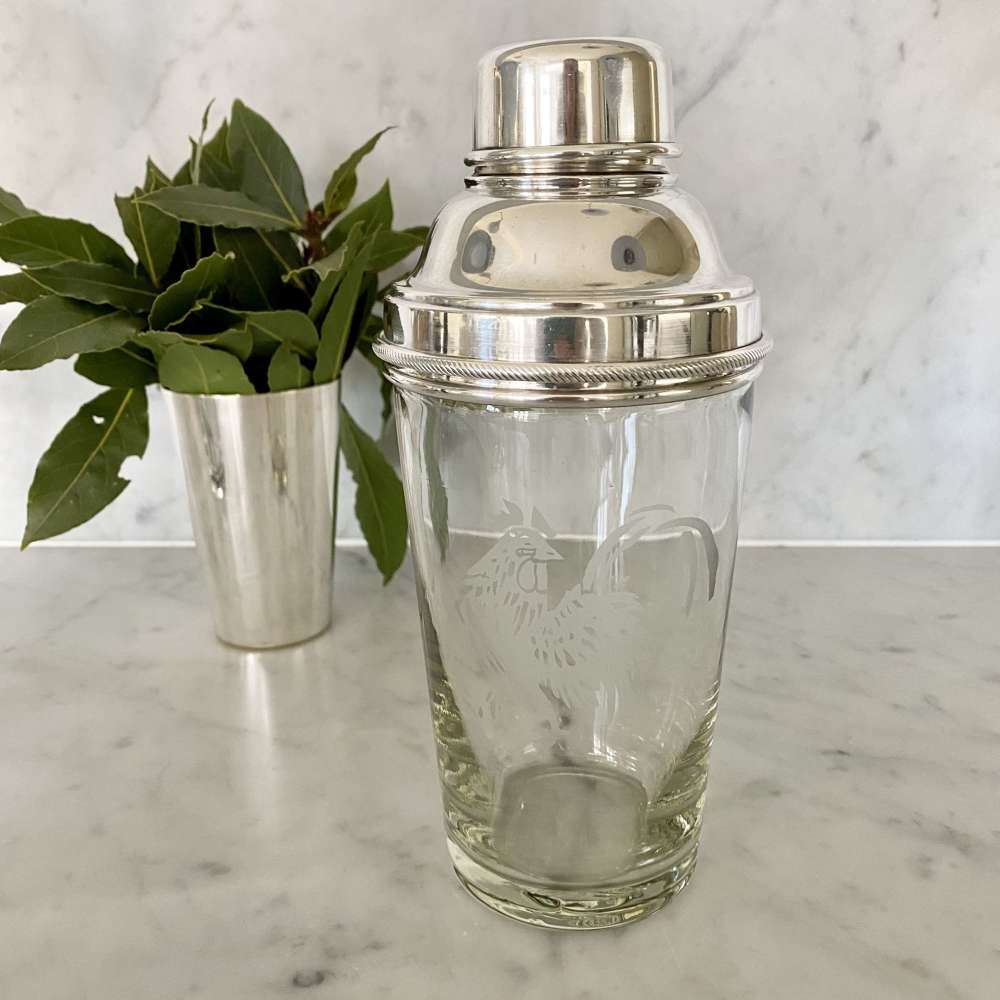 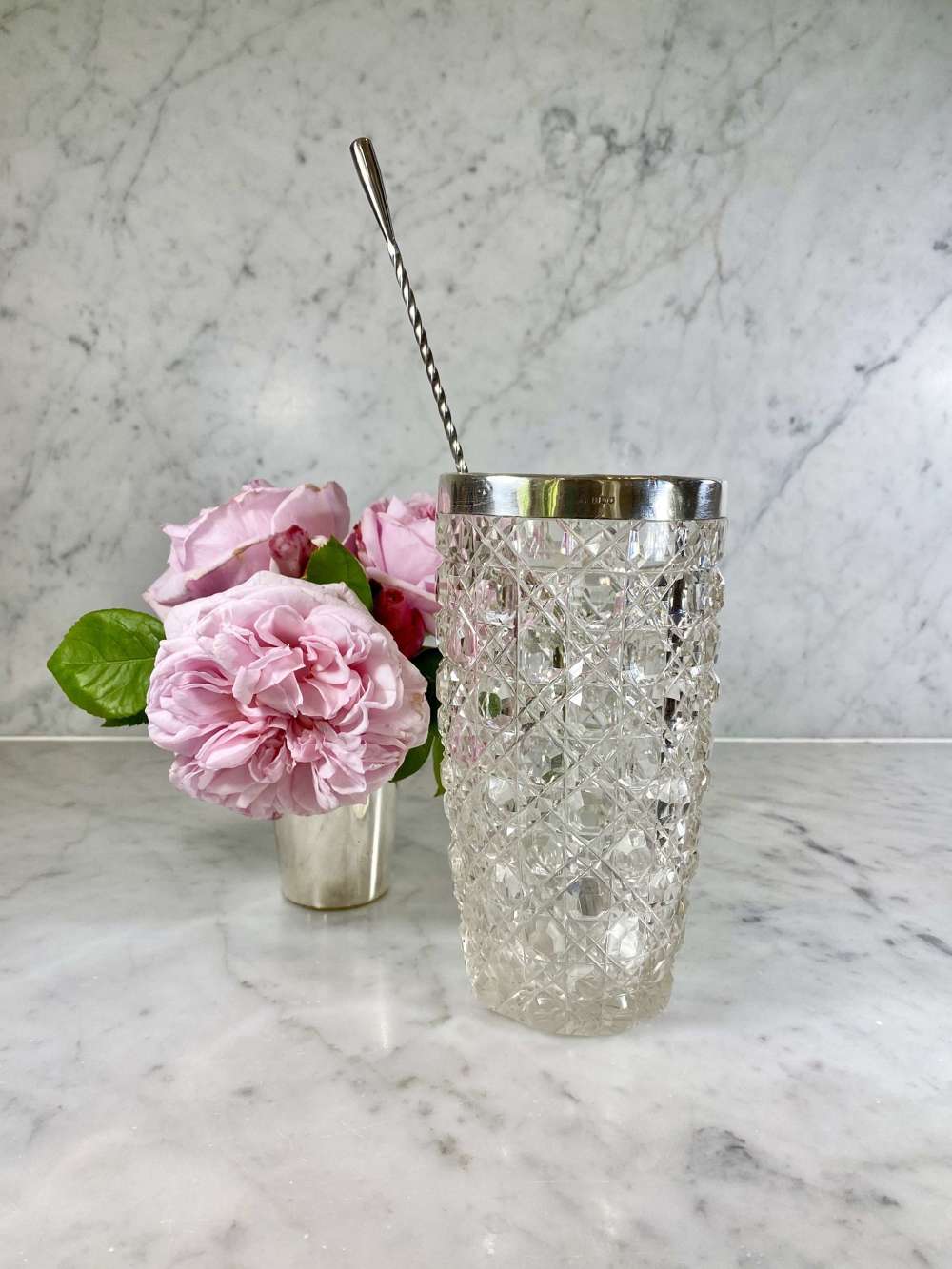