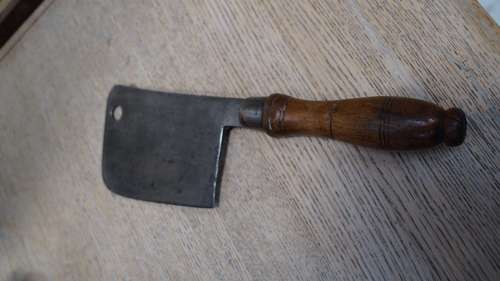 Victorian Meat cleaver made by Brades Co England. This steel meat cleaver has a turned wooden handle, the cleaver is imprinted BRADES Co 1 on the blade. C1890 The piece of Butchery History is in lovely condition for its age.
The founder of the company, William Hunt, was an edge tool maker at Rowley Regis, near Dudley, Worcestershire, in the late 18th century. In 1782 he purchased the Brades Estate at Oldbury, near Birmingham, and established a new works there known as Brades Forge, or simply as The Brades. By 1805 they were also manufacturing steel on the site, which was now known as the Brades Steel Works. Around 1793, Hunt took W. Cliffe into partnership, and for a short period the firm was known as Hunt and Cliffe: this name appears in the company's first ledger, dated 9 May 1794. This partnership dissolved around 1803, and Hunt continued trading on his own account until 1809, when he took his sons into partnership and the firm became known as William Hunt & Sons.

Other items in Antique Kitchen Utensils

View all in Antique Kitchen Utensils