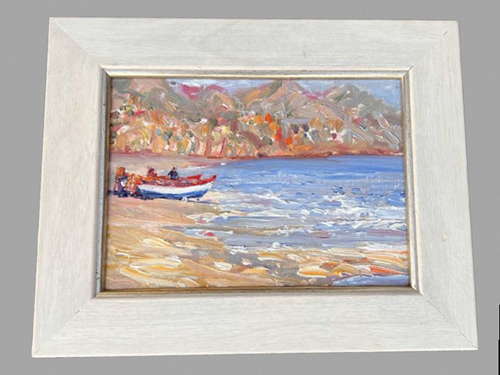 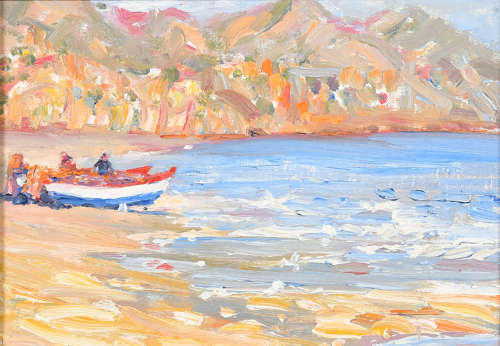 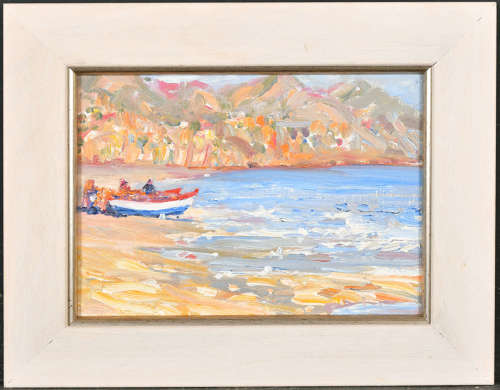 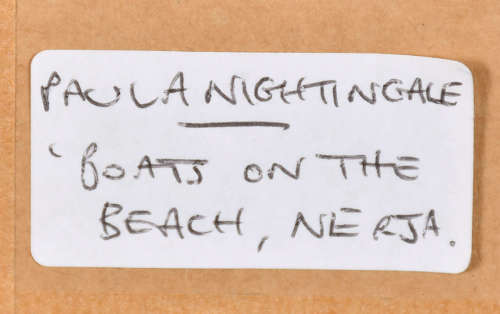 Paula Nightingale - Oil on Board - A Spanish Beach

Paula Nightingale, was born at Lewisham, London in 1937, daughter of Herbert Paul Nightingale (22 June 1888-25 June 1965), a school-master, and his wife Adrienne Margaret née Houston (8 February 1910-2001), who married at Lewisham in 1934 and in 1939 were living at 29a Crystal Palace Park Road, Beckenham, Kent. Being passionate about art, Paula graduated from Beckenham School of Art and followed this with a 1st class honours degree from the Royal College of Art. She then completed a year's Scholarship at the Akademie der Bildenden Kunst in Munich, where she explored the techniques of etching. She married Belgian born schoolmaster and writer Rodolph Antoine Lewis de Belgeonne (born 1938) and they had three children, Rudy Justin, Marie-Sophie and Théo Paul and after their divorce Paula adopted Jean-Jacques and had a daughter Frances Rose, who appears in many of her paintings. Paula and her husband used a converted London double-decker bus as their home to travel to Europe in the late 1960s. In the early 1970s Paula settled in Aldeburgh, Suffolk with the Suffolk coast being the artist's continuing inspiration and she captures the timeless quality of this county. Paula's work has been exhibited at the Victoria & Albert Museum; Alpine Gallery; New Grafton Gallery and Mercury Gallery in London and Thompson’s Gallery, Aldeburgh and many other venues. Her work has been accepted for an Open Exhibition at the V & A Museum and in 1989 for the Royal Academy Summer Exhibition. A former teacher at the Ravensbourne College of Art and is an Associate of the Royal College Art and a member of the Suffolk Open Studios from her studio at The Boathouse, rear of 17 Commodore Road, Oulton Broad, Suffolk. Paula illustrated Stephen Corrin's translation of 'Katya and the Crocodile'

View from the bridge. Oil on canvas and cardboard, 41x51 cm