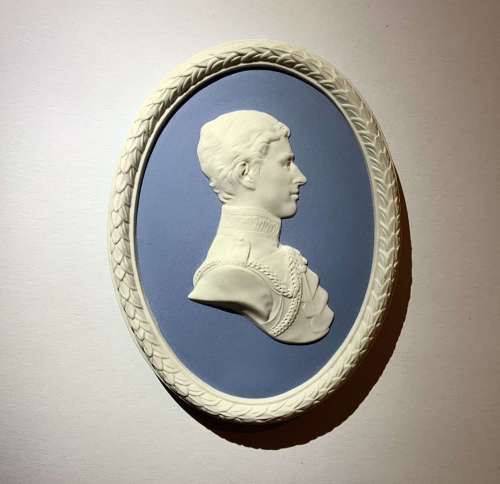 A Wedgwood pale blue & white jasperware portrait plaque of King Charles III while he was Prince of Wales, modelled by the sculptor Arnold Machin O.B.E., R.A. (1911-1999).

The portrait here is said to have been one of Queen Elizabeth II's favourite likenesses of her son. He is wearing the tunic of the Colonel of the Welsh Guards with the distinctive "drooping tabs" and "aiguillette" (ornamental braided cord) to the front of the uniform.

No.1129 from the limited edition of 3000. Retaining its original box and paperwork.

Although not, perhaps, a household name, Arnold Machin is one of the most reproduced artists in history. Machin’s portraits of Elizabeth II were used on all British coinage from 1968-1984 and on all British definitive stamps from 1967 to the present (of which it is estimated that some 320 billion have been issued).